Igbo Israel: History, Origin All You Need To Know 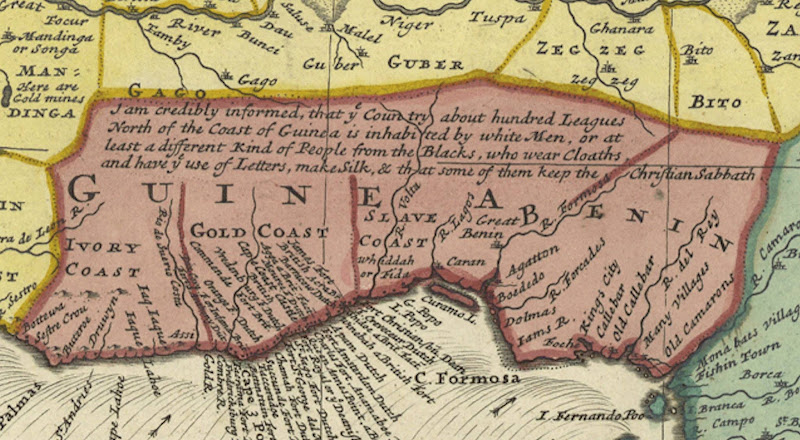 1710 map by Herman Moll with description of "White men" in West Africa who "keep the Sabbath."


Many Westernised Africans before the 20th century regarded West African history and culture as inadequate for countering the Western narrative of African inferiority. European imperial powers relied on the bible as a historic and scientific source and drew from it the Hamitic theory, the theory of conquering Asiatic white people who left their traces among ‘darker races,’ in order to legitimise their conquest. Europeans at the time searched for any tenuous links that could be made between African cultures and the Levant to find ‘Judaic influence’ in a particular area, without any evidence from indigenous history itself.
The Hamitic theory, in the minds of Westernised Africans, proved to be a literal redemption for Africans and their history. The newly Christianised black people, living during and after the abolishment of slavery in Britain, looked towards the ‘racial uplift’ of black people in order to challenge the characterisation of black people as a savage race without a history. Many people who followed this movement adopted the Hamitic theory and in line with European perceptions, they regarded contemporary Africans as existing in a degraded state, contrasting with their past glory in Asia. Olaudah Equiano alluded to this in “The Interesting Narrative… ,” an 18th century slave narrative and abolitionist piece, when he compared the ‘Eboe’ (Igbo) to the Jews. He writes on page 7 of “The Interesting Narrative…” of 1794 “[a]s to the difference of colour between the Eboan Africans and the modern Jews, I shall not presume to account for it. It is a subject which has engaged the pens of men of both genius and learning, and is far above my strength.” As can be gleaned from his last statement, his comparison of the Jews and ‘Eboans’ came from a source which was likely connected to Western scholarship at the time. Olaudah Equiano’s views on Igbo Israel could not be articulated from the little Igbo folklore that he managed to salvage, for example.
Philip S. Zachernuk writes: “The Hamitic model was attractive because it was authorized by imperial writing, and because it could support an historical identity acceptable to an aspirant colonial élite. … [Africanus] Horton [or James Beale, a medical surgeon of the British Army from a prominent Krio family of Igbo descent in Freetown, Sierra Leone] squares off against … proponents of … African inferiority, … he argues that the Igbos' religion showed clearly that they were one of Israel's lost tribes. This fact vouched for their potential. …”
Westernised Africans used Western and Asian cultures as a barometer for success and potential, African cultures’ value in their minds was not based on an evaluation of their ethics and achievements, but by their proximity to civilisations held in high esteem by Westerners. The view of African cultures on their own however, Philip S. Zachernuk writes: “... like his African-American and European peers, Horton believes that West Africa's history added little to his defence of his race. … West Africans [according to Africanus Horton] had until recent European contact lived generally in a state of 'utter darkness' and 'barbarism'. They had no history since their migration because without a written language 'events once out of sight are for ever lost; they pass away like spectres in a phantasmagoria, leaving no other trace behind them than a dreamy collection of some distant circumstances that had taken place’."
What is often overlooked in these sources proposing an Igbo-Israel link is the extreme racism and stereotypes that are often the core beliefs of the writers, whether Westernised-black or white. This includes the allusion to Igbo culture being a ‘negrofied’ and, hence, degraded version of Hebraic customs. Some contemporary proponents of the Igbo-Israel link accept these racist views and point out that ‘barbaric’ customs that link the Igbo people with their neighbours is as a result of the original (white) Hebrews ’soiling’ themselves, their customs and their heritage by intermingling with Africans and borrowing their customs, and therefore breaking a covenant with the Hebrew supreme deity which has led to the misfortunes (slavery, war) that has befallen the Igbo people.
Anthropologists and missionaries who alluded to a supposed Jewish link with the Igbo people were going along with the prevailing European colonial narrative at the time, Britain and other European nations were happy to see evidence of past ‘Eurasian’ influence on ‘darker peoples’ because it validated and reaffirmed their presence as part of an ancient rule of conquering white people from Eurasia. Philip S. Zachernuk:


G. T. Basden, writing as a missionary who 'enjoyed the privilege' of the Igbos' 'intimate confidence and friendship', … suggested like Horton that their favoured groups had racial affinities with ancient Hebrews … insisting that their West African groups were not remote primitives but vestiges of a higher culture.

The flag of colonial Nigeria notably has a hexagram similar to the Star of David which may be a hint to the Hamitic theory of civilising white Asiatics. The area that is now Nigeria has been under this speculation by Europeans for centuries, in a 1710 map by Herman Moll, the annotation for Guinea, which today is the area between Ivory Coast and Cameroon, reads: “I am credibly informed, that ye Country about hundred Leagues North of the Coast of Guinea is inhabited by white Men, or at least a different kind of People from the Blacks, who wear Cloaths, and they have ye use of Letters, make Silk, & that some of them keep the Christian Sabbath.”
The work of Olaudah Equiano, Horton and so on were, at their time, with their understanding, their way of improving the image of African people, an image which at the time of Equiano meant the difference between the continuity of the emptying out of Africa of people for European colonial plantations, or abolition. For Horton, his separation from his parents culture and his patriclan and the lack of any material countering Eurocentric views no doubt influenced his view about Africans; Igbo society, for example, is structured and therefore dependent on not only the knowledge of generations of ancestors, but also the history of how each family came to be in the community which in turn affects their standing as a voice in the community. Today there is enough evidence from different sources including Africans living in their culture today to show that West African cultures, including the Igbo culture, are capable of standing on their own as a testament to African ingenuity, sophistication, and humanity.
See: Philip S. Zachernuk (1994). Of Origins and Colonial Order: Southern Nigerian Historians and the 'Hamitic Hypothesis' C. 1870-1970. pp. 444, 436, 453.
- Ukpuru
To upload your music on Thatigboboy.com, contact us now via:
Email: thatigboboyblog@gmail.com


Copy the link below and Share with your Friends: