Eri, the father of all Igbos, who hailed from Israel was the fifth son of Gad, the seventh son of Jacob (Genesis 46:15-18 and Numbers 26:16:18).  He migrated from Egypt with a group of companions just before the exodus of the Israelites from Egypt many centuries ago. They traveled by water and finally arrived at the confluence point of Ezu and Omambala (Anambra) Rivers known as Agbanabo, located in present-day Aguleri, where, according to oral tradition, it was spiritually or divinely revealed to Eri that Agbanabo (i.e the confluence point of  Ezu and Omambala Rivers) was to be their final destination and settlement. They moved into the hinterland and settled in the present-day Aguleri but the settlement wasn’t known as Aguleri at that time. Meanwhile, Eri lived and died at Aguleri. 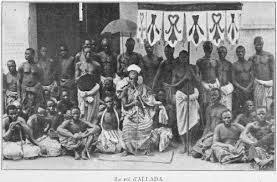 Agulu was the eldest son of Eri who took over from his father after Eri’s demise.

As the population around Eri’s compound at Aguleri increased, and in combination with other factors, some children of Eri and their descendants left Aguleri and founded various other settlements that Igbos occupy today. However, Agulu, the first son, remained in their father’s home at Aguleri with his own descendants.

Agulu, fondly called Agulu-Nwa-Eri, appended the name of their father, Eri, to his name and founded Agulu-Eri (Aguleri) by calling the settlement where his father Eri died and he (Agulu) lived AGULERI.

Menri was one of Agulu’s siblings that left their father’s house. He (Menri) settled at a big forest, where he engaged in hunting and farming, while also performing his spiritual work like other Eri’s children. Menri called his settlement Agu-Ukwu (Nri).

When Menri was getting very old, he told his children to take him back to his ancestral home, as he would not want to die outside his father’s home. Menri was brought back to Aguleri, where he died and was buried. His grave is still marked at Okpu, in Ifite Aguleri, till this day. There is no other grave site of Menri, the founder of Nri, anywhere else in Igbo land, even in Nri itself, except in Aguleri.

It is also a known fact that, by tradition, no other Igbo man would break the kola nut where an Aguleri man is present, except with his permission. This is in deference to the fact that Agulu (Aguleri) was the eldest child Eri.

In fulfillment of the age-long traditional rites for kingship in certain Igbo communities like Nri, every Igwe-elect must visit Aguleri accompanied by a delegation from his community, all of whom will spend seven days in Aguleri visiting sacred places, paying homage and making sacrifices to certain deities/shrines.

Agbanabo, in the oral tradition of Eri clan, is not just any place ‘where two rivers meet’. It has great spiritual significance because it was at this point that Eri had a divine revelation that they had reached their ordained place of settlement.   Members of Eri clan, therefore, have a strong spiritual attachment to Agbanabo. And this has made it an important and mandatory feature in the coronation rites of the people of Eri clan.

The visit an Igwe-elect, with his people to Aguleri, including the places he’ll go to, making sacrifices and paying homage to certain deities/shrines, can be well captured in a video coverage these days. All such videos are available in Aguleri archives for anyone who cares to see and is interested in knowing the truth. By Imanuel Jannah

To upload your music on Thatigboboy.com, contact us now via:
Email: thatigboboyblog@gmail.com


Copy the link below and Share with your Friends: